A nice option, 2015 Toyota Yaris has a refreshing look and does have a confident aura. Its European design will make it stand out on American roads. 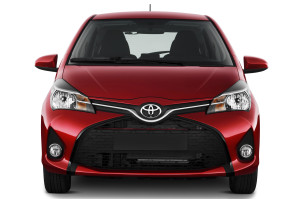 Exterior and Interior of 2015 Toyota Yaris

It is available in 3-door and 5-door configurations. The design of the vehicle comes from France, which gives it a different look suggesting sleekness and agility. The large grill with a revamped look from its previous version is something to look out for. The Toyota emblem stands very strategically in the front flanked by the two headlights, which provides a balanced appearance to the car.

The interior of this car has refreshing features and is devoid of the silly utilities that some models in this genre are offering. The intuitiveness present in the inside is attention drawing. The controls are thankfully simple, driver-friendly, and a pleasure to use while horizontal shelf-like patterns on the dash create an amicable impression.

Storage has been given a great focus here. Cup holders, trays, and bins have been provided and for additional space, an elongated tray below the dash has been given for passenger use. The neat look inside is the major charm. The three-spoke steering wheel and the gauge cluster have been updated. In the SE trim level, leather-wrapped steering wheel, and contrast stitching can be noticed.

Not much of a choice where engine is concerned; you get the 1.5 liter four-cylinder engine, which falls flat in front of its contemporaries fitted in vehicles like Fiesta and Fit. The engine generates 106 hp while others can rev up to 130 hp. It is surely puzzling why Toyota has equipped a beautiful creation with such a low performing engine. Its torque is 103 lb-ft, which can be attained after heavy work up at 4,200 rpm. MPG is fixed at 30 in city, 37 on highways. Fuel efficiency is not much, as the engine has to work hard for keeping up regular speed.

In all, the car is high of style and does not quite match up to expectations when it comes to performance. Hopefully, when 2015 Toyota Yaris comes out in the market, it will give Americans more reasons for possessing it.