2015 Ford Expedition is being eagerly awaited for its better-performing engine and much classier looks. It is available in standard and EL versions.

The outer appearance of this vehicle is very proportional, solid and compact. It definitely has a presence that is difficult to ignore. 119-inch wheel base is for the standard version while the EL version rests on 131-inch wheelbase. Restyled fascias add a rare contemporary look to it. The front is eye-catching with the sleek headlamp bezels and LED fog lamps. These seem to get blended into the classic chrome grille having three bars. A look at the rear will unravel certain cool features. The remodeled liftgate is interesting and the dual exhaust outlets are chrome-tipped. Restyled alloy wheels with 22-inch diameters are another attraction.

The interior boasts telescoping tilting steering wheel. The instrument panel design has been upgraded. The SUV has the capacity of 7/8 passengers. There is driver information screen with 4.2-inch display. MyFord infotainment navigation system with SYNC technology has been provided through a high resolution screen with 8.0-inch dimension. Rear view camera, push button start included Intelligent Access System, Sony premium audio system that is 10-speaker 700-watt strong, LED lighting in 7 colors and Ford’s own apps for helping during off-road driving and towing of trailers are some other features. Various noise-eliminating features have been added that makes it a quieter interior. Sound dampening materials have been used on the cabin pillars and acoustic laminated windshield does great for cutting down the din. 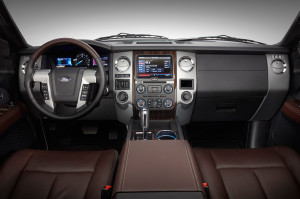 Engine and Mileage Given By 2015 Ford Expedition

This SUV is powered by 3.5 L EcoBoost V6 which is Ford’s own reliable engine. This twin-turbo/direct-injected engine has the power of 365 hp and raises torque of 420-lb ft. It is equipped with a 6-speed automatic.

Fuel economy is definitely better in this vehicle. As per Ford, 15% betterment is expected over their last engine V8’s mileage. EcoBoost will give impressive performance in both rear driving and 4-wheel driving. EPA rating is 14-16 mpg for city and 21-23 mpg for highway.

Touted as Ford’s suburban fighter, this SUV has remodeled front and rear looks that give it an edge over its predecessors. It is fitted with EcoBoost V-6 engine that is one step ahead of the one that is present in the older Expeditions. 2015 Ford Expedition is spacious and a stylish vehicle that has great towing facility.